Razor fish also known as Shrimpfish belongs to the Centriscidae Family which consists of dozen species. They have a unusual appearance as their name indicates.

Most of them species are found in deeper tropical, subtropical southern oceans but we also get some species shallower in the Indo pacific are. In Krabi we get them as a nice treat around the Ao Nang Islands.

Their bodies are thin and long, the biggest species are up to 34 cm long, the ones we found here are usually around 10 to 15 cm long. They swim around in a head down position and are usually seen in groups of up to 10 individuals, as they hide close to seaweed or coral trying to blend in with their environment.

Their snout is long and narrow and has no teeth, but then they don’t need teeth as they feed on zooplankton. 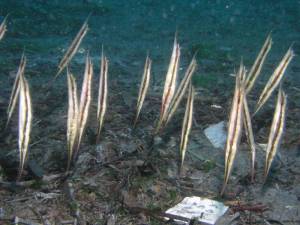