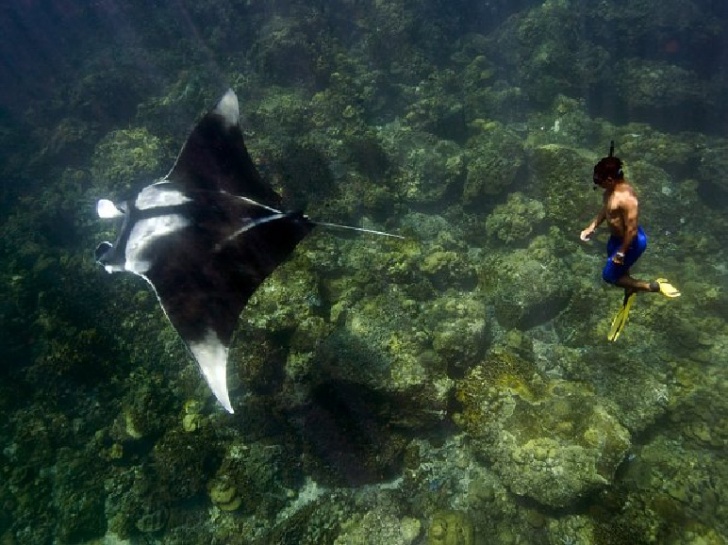 The word ‘Manta’ comes from Spain and means cloak or shawl. 20 years ago we almost did not know anything about the world’s largest Ray. There are two kinds of Mantas and that is Manta Birostris (the giant ocean manta) and Manta Alfred (the resident reef manta). Mantas are close relatives to all kind of sharks and rays but do not be afraid! They only feed on the smallest organisms in the sea, like small fishes, shrimps and plankton. They are also very intelligent, curious and playful. They actually have the largest brain of all the world’s fishes!

A Manta can never stop swimming. If they do the water will stop flowing over their gills which is the way they breathe. So if they do stop, even if it is only for resting they will die. After a lot of research we now know that Mantas can travels long distance in a very short time thanks to their huge wings. They also go very deep down in the ocean, research found one 1372 meter under the surface.
The Manta Birostris is the largest one and can be up to 7 meters from wing-tip to wing-tip and can weigh up to 2000 kilos. Mantas can probably live up to 50 years and possibly for 100 years, we do not know for sure.

King Cruiser sank on the 4th of May 1997 after a collision with Anemone Reef, a well chartered pinnacle. All passengers escaped on life rafts and picked up by nearby diving and fishing vessels.

The ship is a rebuilt, 85 meter long catamaran type, car ferry that was carrying passengers between Phuket and Phi Phi Islands and now stands completely upright at 32 meters of depth. During the years, she has rusted away and collapsed into a fantastic artificial reef, filled with gorgonians, soft coral and large schools of fish.

Access to the wreck is from a mooring line secured at the stern at around 18 meters. Due to the current, sometimes low visibility and the deep average depth, to really enjoy this dive you should be a comfortable advanced diver.

You can dive King Cruiser from our dive centers in Phuket, Koh Lanta & Krabi

The name “Bobbit worm” was puplished in the 1996 book “Coral Reef Animals of the Indo-Pacific”, in reference to Lorena Bobbit, who was charged for cutting of her husbands private parts. The name is inspired only by the scissor like jaws of the worm.

The Bobbit worm is an aquatic predator with a lot of bristles. It lies at the floor of the warm tropical oceans of the Indo – Pacific and warmer regions of the Atlantic. This organism buries its long body into an ocean bed composed of gravel, mud or corals in shallow water. Here it waits patiently for a response to one of its five antennae, attacking when it senses a prey. Armed with sharp teeth, it is known to attack with such speeds that there is no escape and the prey is sometimes sliced in half. The worm hunts for food at night and eats everything from small fish, corals or seaweed up to larger aquatic predators.

The Bobbit Worm injects a narcotizing or killing toxin in their prey animal, so it can be safely ingested — especially if they are larger than the worm, like a Pacific lionfish http://www.youtube.com/watch?v=3H4J5QDQeA4.

The worm can even harm humans, since the toxin can cause permanent numbness.

Unlike a different family of worms, the fire worms, which have harpoon-shaped bristles that release a toxin that can cause severe skin irritation, the Bobbit Worms specimens bristles are not used for defensive purposes. They simply use their bristles for improving traction for crawling over the sediment or inside their galleries or tubes.

Little is known about the sexual habits and lifespan of this worm, but researchers hypothesize that sexual reproduction occurs at an early stage, maybe even when the worm is about 100 mm.

100 mm is very small, considering these worms can grow to sizes of nearly 3 meters, although the average length is 1 m and 25 mm in diameter.

Bobbit worms may accidentally be introduced into artificial environments. In March 2009, the Blue Reef Aquarium in Newquay, England, discovered a Bobbit worm in one of their tanks. The workers had seen the devastation caused by the worm, such as fish being injured or disappearing and coral being sliced in half, but did not find it until they started taking the display apart in the tank. The worm was nicknamed “Barry”.

This dive site is one of the most popular and visited site on the west coast of Thailand. Boats travel from Phuket, Phi Phi, Ao Nang and Koh Lanta to dive here, but it is easy to escape the crowd.

Bida Nok is the outer island of the two limestone cliffs just south of Phi Phi. The south eastern bay is the usual entry for students and beginner divers, but the north western deeper part is a nice alternative for the more experienced.

Depth ranges from just a few meters in the bay to around 30 meters on the wall, which continues out even deeper. However, below 20 meters there is usually a thermocline with poor visibility and fewer amounts of corals with marine life.

You can dive Bida Nok from our dive centers in Phuket, Koh Lanta & Krabi

Gobies is by far the largest family of fish with approximately 1,500 known species over the whole world. Just like its near relative the blenny, the goby usually lives in burrows and holes and are territorial, were most species are around 10cm in size.

The goby is a relatively social animal that lives with its partner for a longer period. The male goby attracts the female by making noises, and it is proven that these sounds are crucial for the choice of partner. The sound is made by the male gathering an amount of water in the mouth and quickly spurting it out with a massive force.

Another very interesting feature many of the gobies have around our dive sites is their partnership with shrimps. They live in a symbiotic relationship and depend on each other for survival. The shrimp is very skilful in digging, finding food and making a burrow. However, since it is blind, it makes the shrimp a very easy snack for predators.

The goby on the other hand, has very good eyesight but lacks the skill of digging, hence also making it an easy target. To survive they work together with the shrimp where the fish sit outside the excavation site as a lookout.

If you look carefully at the shrimp you can see the tentacles in close contact with the goby. If a predator would close in the shrimp can wiggle the tail, alarming the shrimp. The shrimp will then move to the side so the fish can swim in and hide.

If you avoid exaggerated movement and breathe carefully, you can see the shrimp and the goby on the sea floor all over Phi Phi Islands and Koh Haa.